Usually up to 50 years

Small, aggressive, physically durable, industrious, nimble, stealthy
This article is about the Kobold and how it fits in Lemurias. Check out, Kobold (playable) for monster statistics and how they can be played in the game.The kobolds also have a creation myth.


Kobolds are aggressive, inward, yet industrious small humanoid creatures. They are noted for their skill at building traps and preparing ambushes, and mining. Kobolds are distantly related to dragons[2] and urds[3] and are often found serving the former as minions.

Transported from their home worlds (Abeir-Toril and Thurban), the kobolds are the most the most underestimated race you will find on the planet. Despite their cowardice, the race is tenaciously and incredibly violent when their space is being threatened.[4] Kobolds are a race to be respected and perhaps even feared by the adventurers of Phaeselis. Their trap making abilities, and their natural talent for mining makes the Phaeselis cave system a dangerous place to be. Which is ironic, considering how they are unwanted in the city.

Kobolds are reptilian humanoids.[5] A kobold stands between 2' and 2'6" (60cm – 75cm) tall, weighing 35 to 45 pounds (16 – 20kg). A kobold is a small, lizard-like humanoid with a short, stunted snout and a long, slithering tail. Their hands and feet end in sharp, clacking claws, and their scales appear in a variety of colors, including red, black, white, green, and blue.[6]

Kobolds are actually corrupted Dragonborn.  They are considered to be a corrupted part of the dragonborn race by the Dragonborns and then usually treated like trash and refuse by the race.  They used to be the grunts for the Dragonborn, having been made for toil and labor as slaves, but since on Thurban the Turathi had fell, the Dragonborn treat kobolds as garbage.

Mythologically linked to Echidna, kobolds do show some signs that the Mother of All Monsters were their forebearer.  They are typically fecund, and they grovel around Dragonborn and the dragons a lot.  Sometimes, the kobolds worship the latter as gods.  Kobolds are often still employed as house slaves by the Dragonborn.

What actually created the kobolds was a genetic mixup back on Thurban.  Someone wanted to breed a race of slaves from the Dragonborn, and they were largely successful, selecting for small stature and submissiveness as genetic traits.  When Thurban faced it's greatest crisis from an alien (elven) invasion from the Great Beyond, many kobolds fled through the Dragon Gate first before the Dragonborn could.

Treated as dirt, the the Kobolds are referred as "gully" or as "gutter dragonborn."  The humans just call them kobolds, according to the ancient legend of small mountain men that like to go bump in the night.  True to form, the kobolds regressed to a stone age, or Chalcolithic society and typically live in tribes in the wild where they can.

Sometimes, though, if a tribe needs a king, they would seek out a dragonborn in order to make him or her their king or queen.  It doesn't matter what sex or age, they will take who they can get to wear the royal crown.  This often leads to -- "Becareful, don't wander off, or the Gutter Dragonborn will get you!" from parents to their offspring.  Which is often true.

Kobolds live in the dark, ideally underground or thick forest,[7] in tribal societies.[3]Their lairs are often overcrowded, although when one tribe becomes too numerous, it splits. The overcrowding has eliminated the concept of privacy, so kobolds sleep in communal areas, and nudity is not regarded as shameful or offensive, even to the opposite sex. Kobolds wear clothing for function or ritual, but not to prevent nudity. The common overcrowding leads to conflict, and two kobolds will fight to settle their differences, although these fights are not usually lethal. This leads to a lack of deep-rooted or severe divisions or grievances in kobold society.[8]

They are respectful of authority figures, and will obey diligently, particularly when their ruler is lawful evil.[9]

The greatest art for kobolds is trapmaking. The use of invention and cunning in traps is the mark of a good trapmaker. The other art form is the pictorial representation of the tribe's history, created on the walls of a specially created room in every lair. Kobolds enjoy making jewellery from the gems and precious metals they encounter while mining. They can be possessive about their personal jewellery collections, and much effort is put into crafting beautiful jewellery, unlike other items, which are functional more than aesthetically pleasing.[10]

At some point in time, kobolds learned to domesticate dire weasels to serve them as guards and hunters. This resulted in lycanthropic kobold dire weasels. Around one in ten thousand kobolds is a natural lycanthrope in this manner.[11] Kobolds also use dire weasels as mounts.[12]

Where other races consider heroes to be those who enact great feats of strength or military prowess, kobold heroes are those kobolds who show great prowess in trap setting, torture and ambush.

Most kobolds are miners and so dress in sleeveless tunics and breeches, but kobolds enjoy dressing in more elegant clothing for festivities. This includes clothes made from silk or leather, but tailored clothes are only common among leaders. Garments are often made to compliment the wearer's eyes, which involves the use of orange or red dyes. Other garments might be dyed to demonstrate the wearer's affinity to a particular kind of dragon. Kobold garments have conservative lines, not exposing bare scales in a suggestive way. Kobolds require the dexterity in their feet too often to wear footwear, and the soles of their feet are hard enough to cope with most surfaces. Due to the amount of time kobolds spend mining, gemstones are readily available, and they use these to adorn their clothing, and to make jewellery.[13]

Kobolds hold a hatred for nearly all other humanoid races and enjoy killing and torturing them, in particular brownies, gnomes, pixies and sprites.[3] As individuals, kobolds are as unique as the members of any other race. But taken as a whole, kobolds share a very consistent and complex psyche.[4]

A kobold is well aware of his stature and physical weakness, so some have a strong desire to prove themselves better than the big folk (humans and Dragonborn). Many kobolds have taken this to a sociopathic extreme, manifesting as cruelty -- especially those who are larger or more powerful.

Kobolds are happy to remain separated from the other races, and are a confident race. A kobold saying states:

It is unknown how kobolds are of dragon heritage. While each kobold values its own life, the tribe comes first. They consider the success of their tribe to be their own success.[8]

Kobold Teamwork in Action! (from Kobolds of Golarion!)

A naked blue skinned kobold with a spear (and yes, this appears in a Paizo product!)

Dragon Herald (from Kobolds of Golarion). 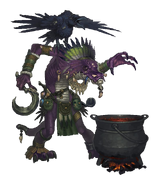 Burn them, burn them all!!

Cover Art for Kobolds of Golarion 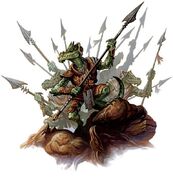 A gaggle of kobolds! 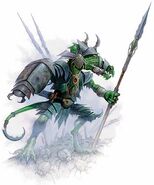